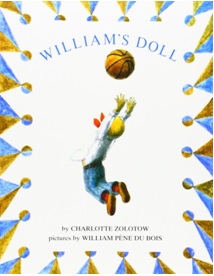 There comes a time when every worship leader just needs a cute, pithy little story with a message that says, “Be yourself!”  This is that story.

Amy Krouse Rosenthal and Tom Lichtenheld have put together a very clever little take on punctuation.  Sound dry?  Not at all!

Exclamation Mark is surrounded by periods.  He tries to fit in, but everywhere he goes he just sticks out.  It isn’t until he meets question mark that he begins to see that he has something unique to offer.

The illustrations are simple but engaging.  School-aged children (first grade and up) who have learned about punctuation will get more out of it than preschoolers, but even very young children will understand the emotions of the main character and his attempts to be just like everyone else.  Adults and older youth will get the visual and textual puns.

It isn’t a super emotional book for sharing in worship, but it is a fun book with a solid underlying message. It is short – approximately 300 words – and some of those words are more for visual effect and would not need to be read.

Because the humor is largely visual, the children (and adults) will need to see the book – this would be a very challenging story to tell in a way that would be understood.  If you use a projection screen in your service, that will help everyone to see the visuals of the book. (When in doubt, seek permission from the publisher, especially if your service is recorded in any way.)  Occasionally interjecting descriptions of the visuals can help adults in the back of your sanctuary follow the action if they cannot see the book.  For example, I might say, “Oh, look.  Exclamation Mark is sleeping on his side so he doesn’t stick up so much. ”

Themes: Being yourself, self acceptance, friendship, conformity